Christmas has come and gone.....

We had such a great Christmas this year. We were able to spend it with our family, minus Jaryd, but we still managed to have a good time!! We are all very spoiled and I am thankful we were able to have another fun year. The boys were so excited to put the tree up and we were trying to finish the bathroom so we just let them go to town. 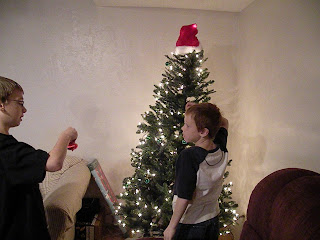 After great discussion and major decision making they were able to complete their masterpiece!! (of which, I cannot locate a picture, so you will have to take my word for it)


On the 20th we celebrated Ryan's grandma Alice's birthday. She is such a great person and I am thankful that the boys have been able to get to know her and have such a good relationship with her! 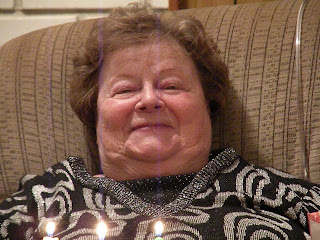 Santa Claus comes each year to this party, and the boys are amazed that grandma is so good during the year that Santa comes to her birthday party. 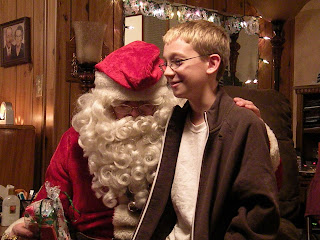 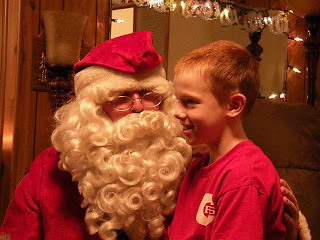 Luckily, they were able to get a last minute list into Santa since they never sent one to him this year.

This was probably our best Christmas morning yet. Santa got it right this year, and the boys were happy and even thankful for all that they recieved. They were so excited to give their gifts to each other and even to Ryan and me. They are growing up so quickly and it is fun to see them actually appreciate what they are given. Now don't get me wrong, they are still boys and sometimes get greedy, but they do appreciate things every once in a while!!
Posted by The Olsens at 6:47 PM 1 comment:

The Olsens
Ryan and I met during high school. We started dating in December '96 and have been together ever since. It has been almost 11 years. I can't even believe how quickly the time has passed. We are lucky to have our two boys: Breydon who is 10, and Connor who is 8. They are the center of our universe, and we can't imagine life without them.